Believe it or not, one of the major concerns I had when buying my Model S was storage. While the Model S has a TON of storage for luggage and larger items, storage for your everyday stuff as a driver is extremely limited. I started looking for solutions before I took delivery of my Model S and have finally settled on one. 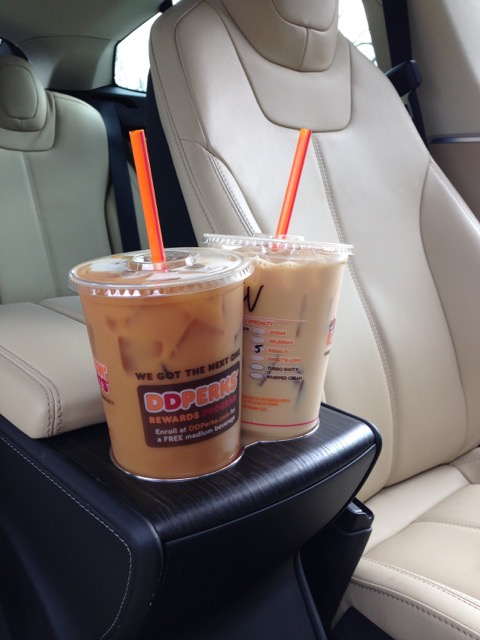 I definitely do not like to clutter up my car with junk, but I do like to be prepared. I have toolboxes, extra charge cables (UMC and extensions), tire inflation kits, extra clothes, more windshield fluid etc. all stored away in the ample large storage space of the car.

When I looked at the car my concern was for the smaller, everyday, stuff. This started with the cup holder situation. I knew there were only two cup holders in the Model S versus the 8 I had in my Acura MDX, but there were other challenges:

I actually took my Dunkin to the Tesla store and did a “fit” test before taking delivery.  Ok, perhaps I’m obsessed.

Storage is also limited. There’s a cubby under the big 17” screen. There isn’t a lot of room there. My sunglasses fit with a cloth to wipe the 17” when it gets too nasty, but otherwise that’s about it (a men’s wallet would not also fit for example) and anything you put there will be pretty visible. Personally I don’t want to stare at a bunch of tissues sticking out of my dash space.

The glove box is not large and since everything else has to go there it tends to be stuffed. Things fall out when it’s opened. Your passengers end up having to open it since there’s nowhere else to put a tissue, an extra charge cable, an umbrella, etc. Every time it rains and I have to reach for that umbrella I cringe knowing things will fall out as I extract it.

My coins (for meters) ended up in a coin pouch in the glove box totally out of reach of the driver. I could have put them in the door but they’d rattle. In the little pouch of the drivers seat and they’d scratch my phone, in the cubby, they’d consume too much space.

Tesla announced a center console around the time I ordered my Model S and I immediately got on the wait list for it. That was March 2014 and I’m still waiting a year later. In the beginning I had no idea I’d have to wait forever for it so I was patient.

While waiting I ran into the Evannex CCI and it had great reviews but it was about the same price as the Tesla one and at first glance seemed about the same to me. So I kept waiting for the “official” Tesla one.

As the months passed I started looking for interim solutions that were inexpensive that would get me by. There are many owners with creative solutions but they all had issues for me and even the $10 solutions didn’t seem worth doing.

As each promised delivery date for the console from Tesla came and went I got less and less patient. Many people managed to take delivery of the Tesla consoles in 2014 were unhappy with the build quality and that also started giving me second thoughts.

Here I should mention that Tesla does have available consoles in the gloss black finish but if you have a different interior finish to match you’re out of luck so far.

As I waited, I saw more and more owners getting the Evannex CCI and started researching the differences.

Just to be clear I’m comparing vaporware with no delivery date (Tesla’s console) to the immediately available Evannex console that I have. You can’t even call your local Tesla store to see a Tesla console – they don’t have any to show you (at least here they didn’t).

I started looking at every picture and video I could find, read the forum posts covering each console, as well as other independent bloggers. While researching the tradeoffs I created this table: 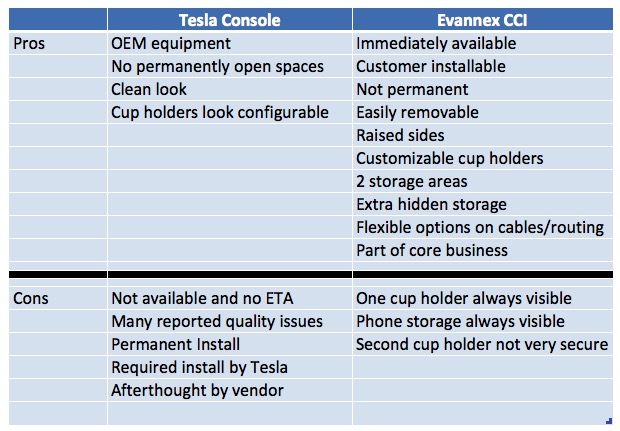 Some benefits were common to each so I left them out. Those are items like additional storage and providing two additional cup holders. The Tesla console and the Evannex CCI are also comparably priced at about $650 so that wasn’t a consideration.

The Evannex CCI benefits I’ll cover in the detailed review below. But the main benefit I saw in the Tesla console was that when all the compartments are closed it has a nice clean look: 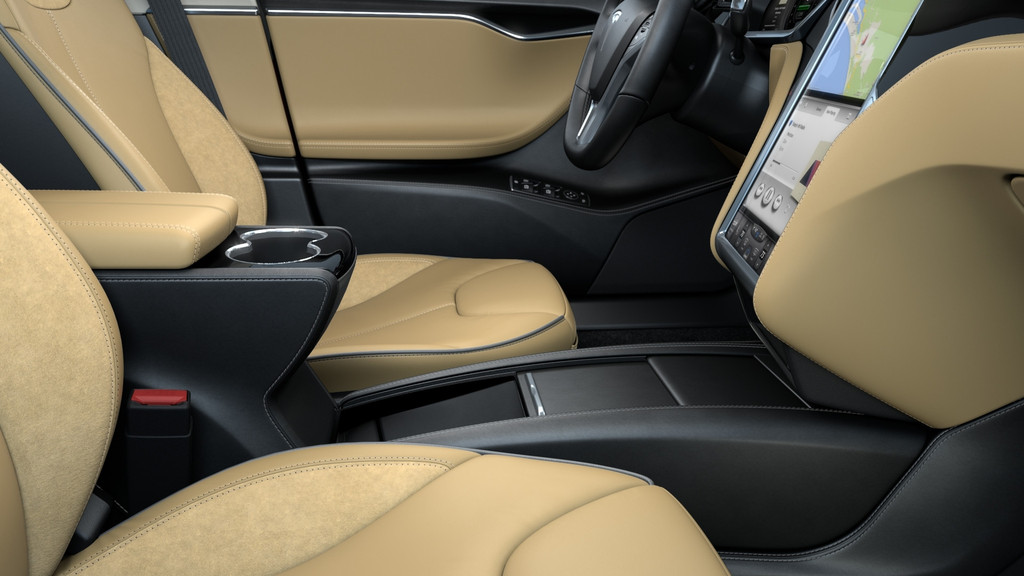 On the Evannex console there are some spaces that are always open – that’s the main cup holder and the phone charging compartment. I wish the design had a good way to hide these when not in use and it is what got me stuck on selecting it for quite a while. 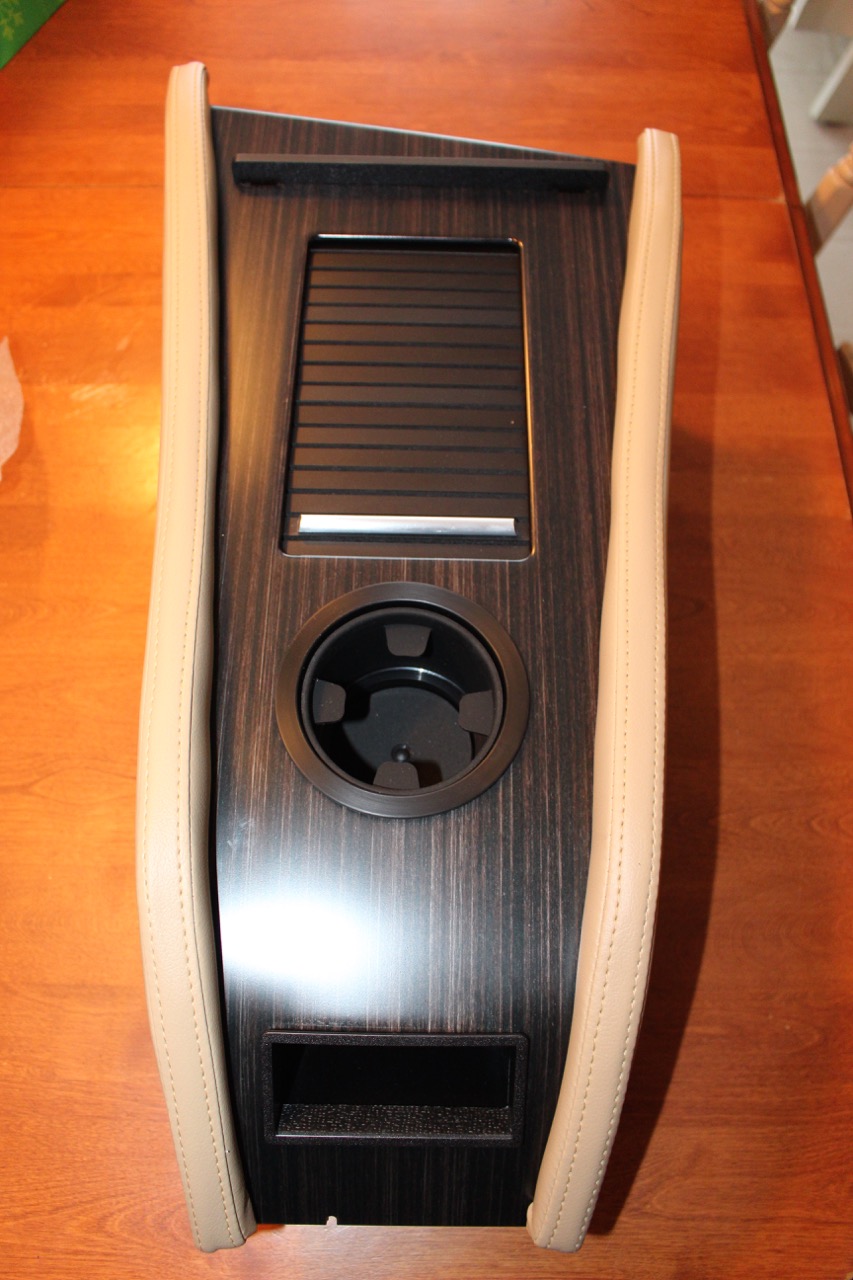 The Evannex CCI comes well packaged in a simple cardboard box. Included with the CCI is a quick start guide and other helpful documentation.

In addition to the quick start guide Evannex refers to an online installation video that I also found helpful.

The phone storage area is really an opening in which you can place your phone or other items you want easy access to. There are provisions to route cables into that area.  This feature I struggled the most with and I have several issues with it:

I also really like the pocket on the front of the drivers’ seat for storing my phone and rarely need to charge my phone in my car. Overall I’d prefer that this space had a cover and that I could then use it to hide a coin purse, Chargepoint card, etc. Right now I don’t really use this space and to be fair, I wouldn’t have use for the phone space in Tesla’s console either. 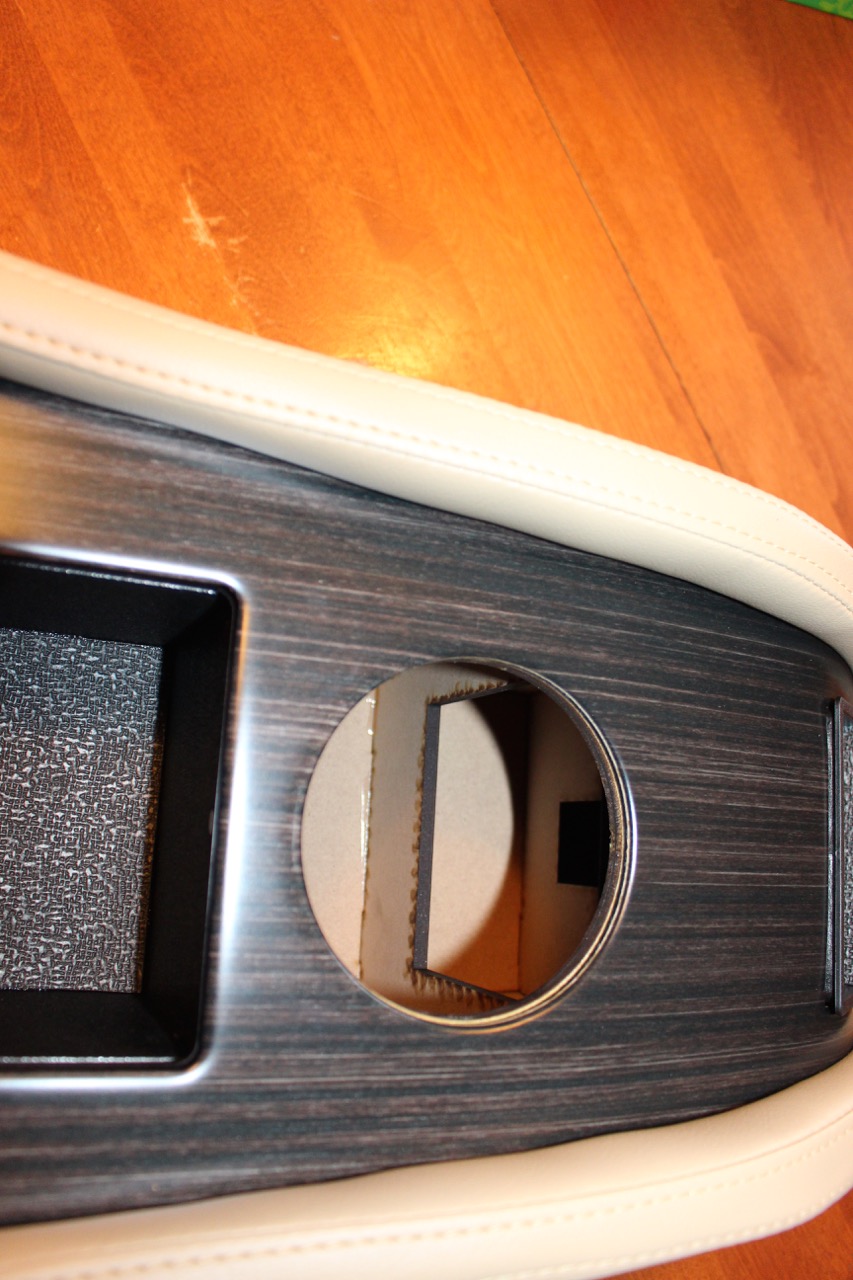 Each cup holder is a good size for large or small drinks. They have rubber inserts with flanges providing a firm grip on smaller beverages. I always get large drinks and found the rubber inserts and flanges to get in the way and grip too much. Fortunately those are easily removable and I’ve removed both.

The next question is where to store those? I found I could remove the entire cup holder and there’s dead space in the interior of the CCI which very conveniently holds the rubber inserts when they’re not in use:

The storage area has a nice sliding cover with a magnetic latch. It’s well made and the magnet is strong. This area will hold quite a bit of stuff and the bottom of it has a rubber pad to stop things shifting around. 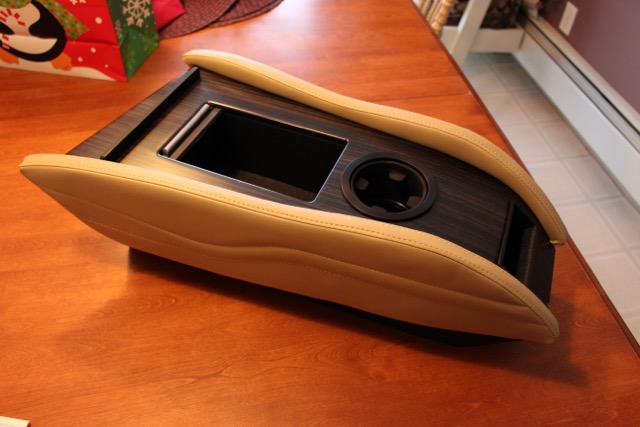 You can add a second cup holder to the CCI which slides into the covered storage area taking up about 60% of the storage space. 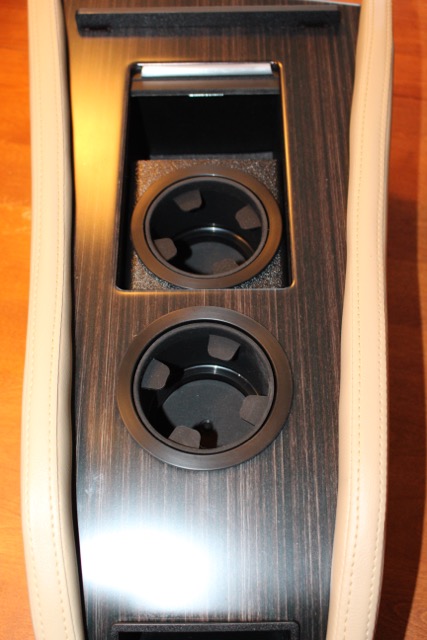 When the second cup holder isn’t needed you can still close the covered storage area to hide it from view. It is also easily removable if you only need it occasionally.

I have one gripe with the second cup holder in that it isn’t very secure. Your drinks wont spill but when you pull them out the cup holder can want to come with it (even without the rubber insert). It also shifts around in the space. I’m wondering if I got one with a bad fit since the instructions made it sound like the fit would be tighter for that insert.

One of the main drivers for the CCI over the Tesla console right now is that it is available to match all interior options. In my case I have the Tan leather interior with the Obeche Matte Wood trim. The CCI was delivered to me within 4 days of placing my order which was stunning after waiting a year on Tesla’s console and still not having a date.

Before installation I held the CCI up to my dash to get a comparison photo. I was shocked at how exactly it matched my interior: 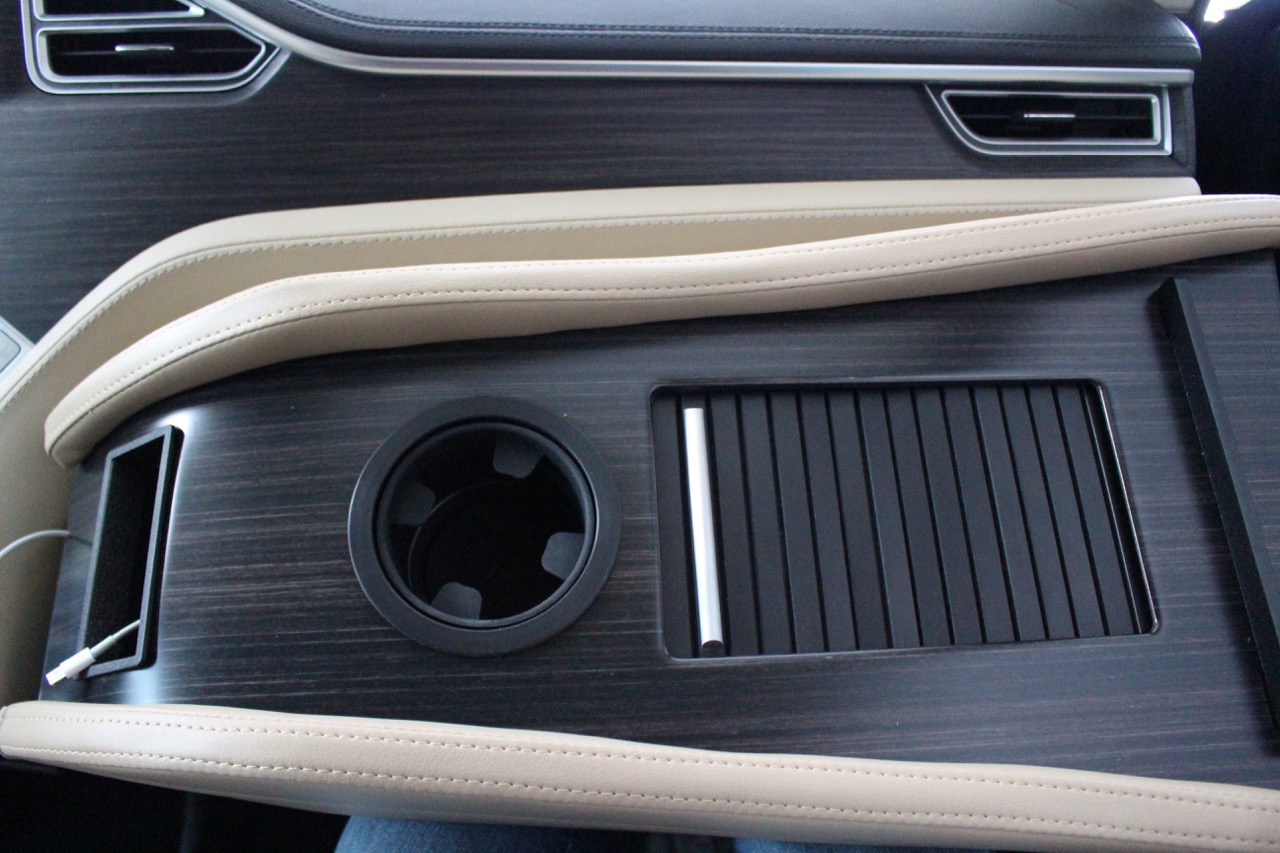 I’m particular about fit and finish but the ultimate judge on color matches and looks is my wife. She had glowing praise for the CCI which is when I really knew we had a keeper.

With the right approach outlined in the video and quick start guide, the CCI drops into the empty space between the two front seats and the dash. There is a trick to it so read and watch those. It is a press-fit so things are intentionally tight.

You should think about what cables (if any) you want to come out of the phone area of the CCI before installing, although since the CCI can easily be removed later you can always change your mind on this later.

I found the fit to be tight but manageable and very secure once installed. When installed the CCI does not block the cubby space under the 17” screen and you still have full access.

When I first installed the CCI I noticed a gap between the CCI and my storage rails: 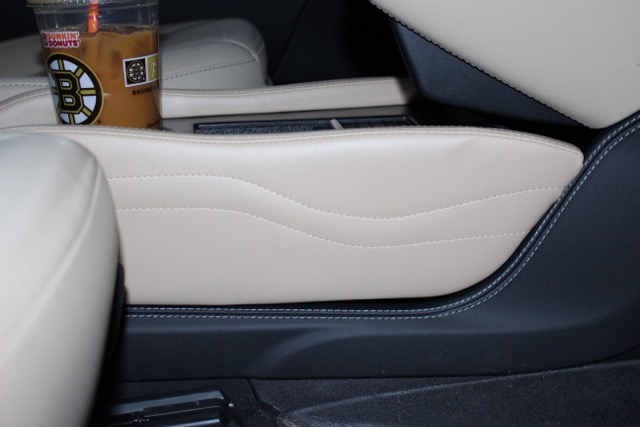 I found that sliding the CCI forward just a bit (there’s a little give to do this but you have to apply a bit of force) closes up that gap for a nice clean look: 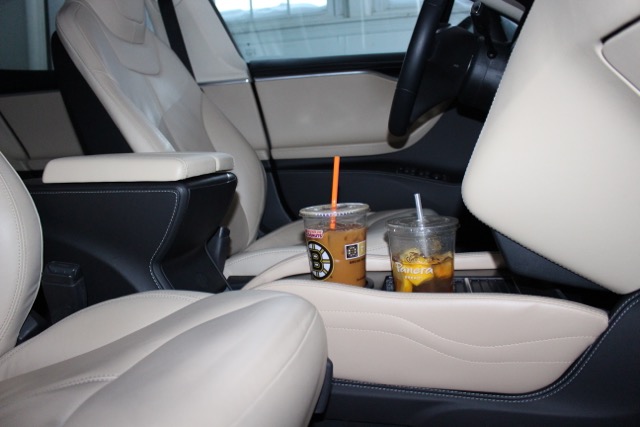 The CCI is very removable and I wouldn’t think twice about taking it out if I needed to. It is also very secure once installed and I’ve had no movement driving through snowstorms and over potholes and frost heaves. The Model S is tough and the CCI is designed to match that toughness. 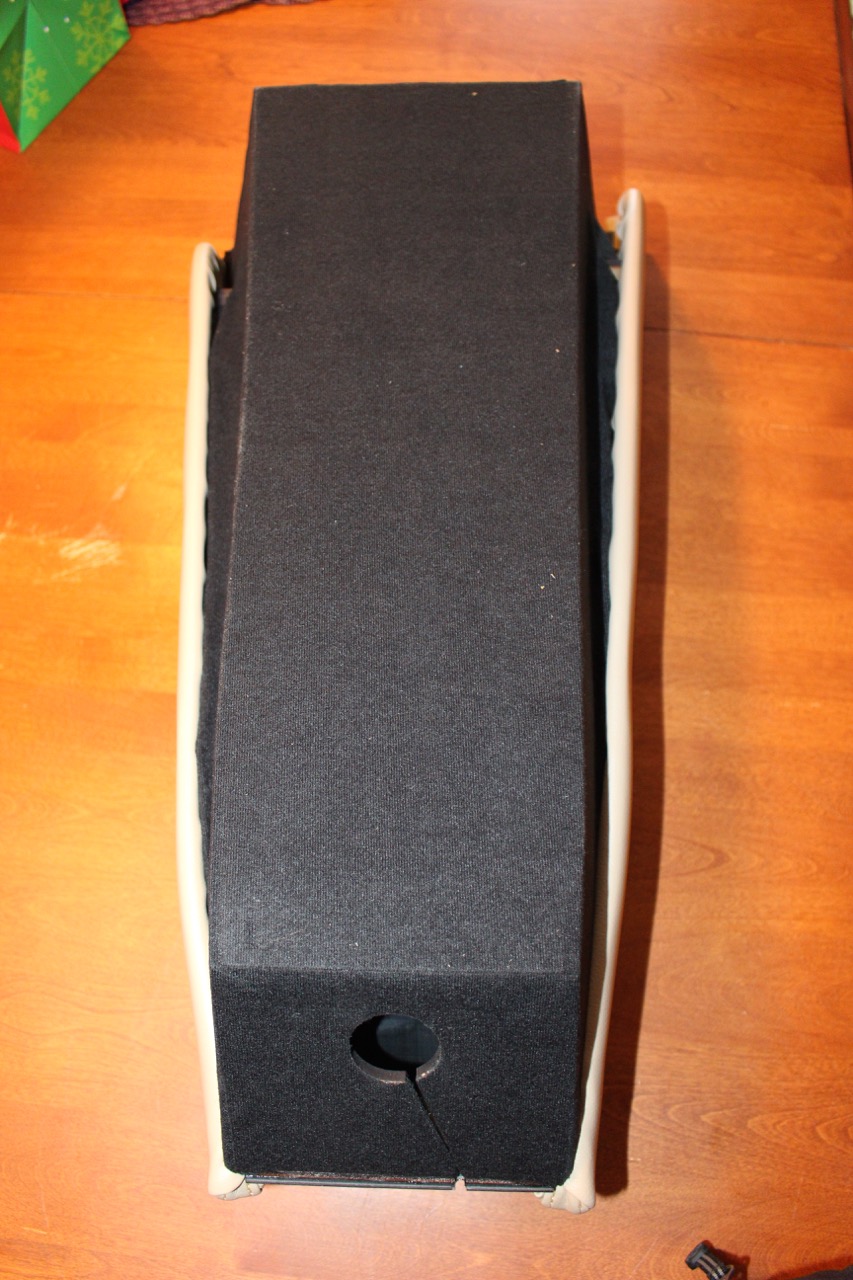 The bottom of the CCI is covered with the same kind of material that’s already between the seats and the bottom contact is essentially carpet on carpet. I would recommend a good vacuum before installing the CCI. No reason to trap dirt there. 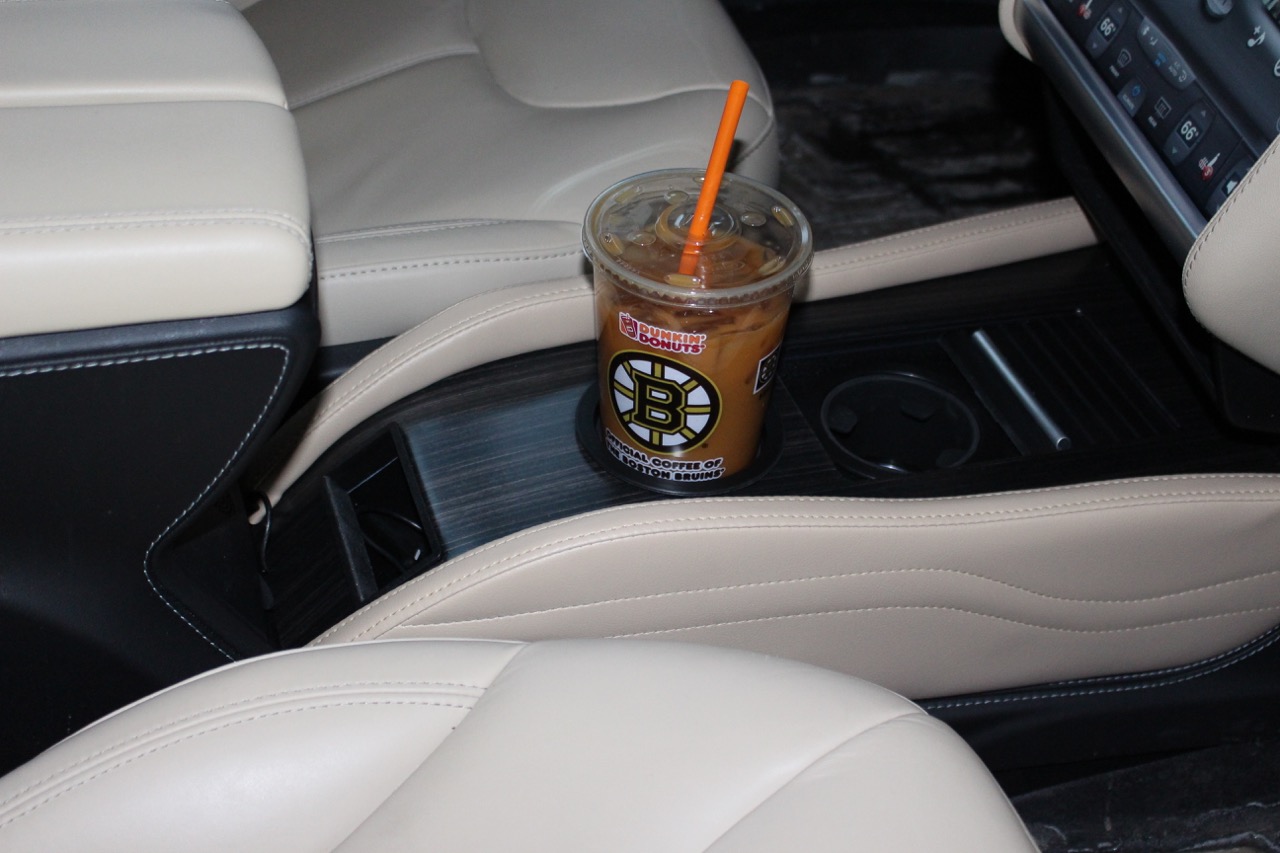 I use the CCI every day. The main cup holder is my go-to spot for my daily Dunkin Donuts fix (a large drink which also is in a cozy and both fit well) and it is in a much better location.

When we have 3 or 4 drinks we make use of the Tesla cup holders. They’re the fall back and now people in the back seat can actually put a cup somewhere secure. What a concept! 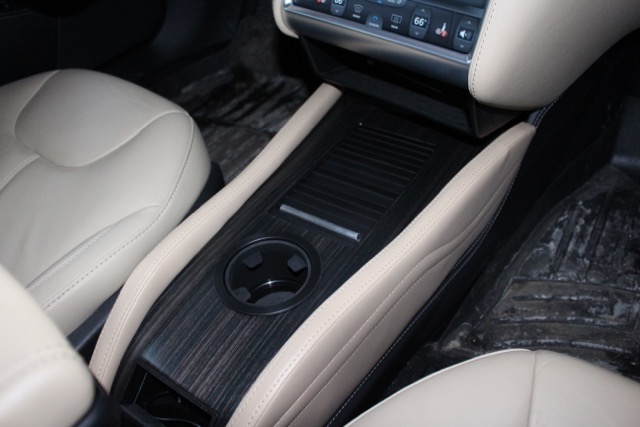 I’m starting to think about using that dead phone storage space at the front for something, but haven’t decided quite what yet.

Evannex if you’re listening: a drop in there that provided a cover would be cool. Perhaps a real coin holder?

The CCI has a great clean look from every angle. It’s shorter than you’d expect and your knees don’t bump into it.

There are times when you have paperwork, a wallet or some other things to put down for a bit and thanks to the sides of the CCI you can safely put them on its surface without them moving too far. Be very careful not to scratch the surface though. Since the sides of the CCI are raised above the surface, unlike the Tesla console you can use them to elevate a laptop when you’re parked.

The CCI has surprised me in how well made it is and how well its solved my internal storage problems. I find it amusing that Tesla is so big on keeping space clean and uncluttered yet they made a console that forces an all or nothing decision. With the Evannex CCI you can have your cake and eat it too. Put it in when you need it; take it out when you don’t.

Ultimately, three things convinced me on the Evannex CCI:

Anyway, If you’re looking for a center console, the Evannex CCI is an excellent solution and it’s immediately available in styles to match the interior of your Model S.